We have also never been in a situation like this! The Coronavirus has a great impact on us all. We will do our very best to inform you. We hope you understand that the current regulations are leading to many questions which places enormous strains on our guest support. Of course we will be at your service and we would like to refer you to telephone number: +31 (0)347 750 430, however waiting times can be longer than usual.

Taking care of our guests and employees is our number one priority. Despite the easing measures concerning the Horeca sector at the 1th of June, all restaurants and bars from Fletcher Hotels will only be open for hotel guests. If you have not booked an overnight stay, but you want to make use of our hospitality on the terrace? Feel welcome and enjoy the beautiful weather.

Hopefully soon we can welcome you back in our hotels and restaurants!

Fletcher Monastery Hotel Willibrordhaeghe has a rich history and has carried out various functions. The mission house on the road from Deurne to Vlierden was opened in 1954. This building was a rebuild of the Mission House in Uden, which was opened in 1911 and was destroyed in 1944. The Mission house was the minor seminary of this congregation, also known as the "missionaries of Steyl". The Mission house accommodated the priests and monks from SVD, which stands for Societas Verbi Divini, meaning Society of the Divine Word.

Willibrordhaeghe was given a different function in 2004, when it became a conference hotel. Due to the financial crisis, the hotel company experienced some bad years and closed for business in 2014. Nursing home Deurne took over Willibrordhaeghe from 1 July 2014, but has since closed too. Next, Willibrordhaeghe became the focus for an asylum seeker’s centre. From 1 June 2017, this magnificent building will continue life under the Fletcher flag, as Fletcher Monastery Hotel Willibrordhaeghe. 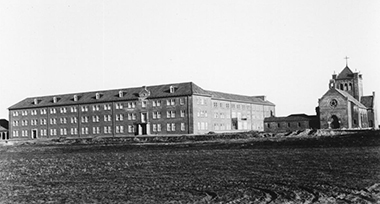 Please wait
Results are being updated.

Before you can continue with the reservation, you must select a date first.

In order to give you a better service Fletcher Hotels uses cookies. By continuing to browse the site you are agreeing to our use of cookies.